General election 2017 – The view through a smoked glass mirror 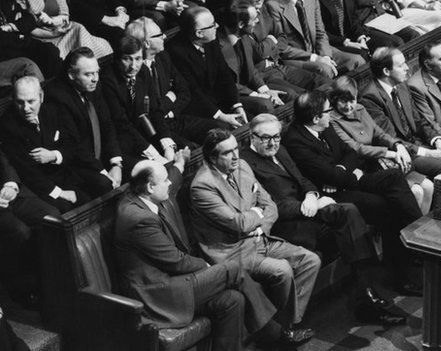 On one side of the House of Commons sits an opposition leader whose confidence is growing by the day.  Originally elected almost by accident and against the wishes of the parliamentary party, that leader enjoys huge support among the party rank and file.  Although slated as an extremist and as unelectable by the MPs, journalists and academics that make up the “Westminster Bubble,” there has been a growing surge of support for the leader from Britain’s young (18-35) generation.

On the other side of the House is a Prime Minister whose standing in the country is falling by the hour.  No longer able to command a majority in the house, barely managing to quell backbench hostility, and dependent upon the votes of Ulster Unionists to govern, it is only a matter of time before the government falls.

This is a reasonable description of the situation Britain awoke to this morning.  It is, however, also a description of the British parliament 40 years ago.  The difference was that in 1977 it was a right-wing Tory leader that stood on the threshold of tearing up the political “centre ground” consensus and replacing it with one of her own – the neoliberal orthodoxy that has been coming apart at the seams since 2008.

Margaret Thatcher had been unexpectedly elected in 1975 after the favoured right wing candidate, Keith Joseph, was obliged to withdraw from the contest after expressing sympathy for the idea of compulsorily sterilising the poor.  The candidate favoured by MPs, William Whitelaw (who later became Thatcher’s Home Secretary) was regarded as being too similar to the defeated Edward Heath.  The expectation once Thatcher became leader of the opposition was that she would abandon her (in their day) extreme policies in favour of a platform closer to the post-war consensus that had prevailed since 1951 – when instead of reversing the 1945-51 Labour reforms, the Tories embraced them and extended them (for example, abolishing prescription charges and building more council houses) with the result that the Tories went on to govern for 13 years.

By the late 1960s, the post-war consensus was breaking apart.  Full-employment had resulted (predictably) in a wage-price spiral that made Britain’s industry uncompetitive in international markets.  This resulted in a falling pound and a growing balance of payments (current account) deficit.  Attempts by successive Labour governments to persuade trade unions to voluntarily weaken their bargaining position failed in large part by pressure from grassroots union members.  A proto-Thatcherite attempt by the Heath government to achieve the same aim was similarly defeated.

What Thatcher sensed was that there was a new anti-consensus mood in Britain, particularly among those younger voters who had not lived through the privations of war and depression which had shaped the post-war consensus.  As Ed Howker and Shiv Malik note:

“In 1979 Margaret Thatcher received a 16 percent swing in support from young people aged 18-35 – the baby boomers – significantly more than any other group… Without their support she wouldn’t have gained power.”

This is how political and economic consensus breaks down – as Max Planck once put it – “one funeral at a time.”  It is a political given that older people are far more likely to vote than younger people.  It is also a given that older voters are more conservative (with a small “c”) than younger voters.  This means that where there is consensus between the two major parties within Britain’s archaic first-past-the-post voting system, politics tends to gravitate to the so-called centre ground.  In the period 1945-1975, this political consensus – built around Keynesian economic ideas – was centre-left (i.e. social democratic rather than socialist or communist).  In the period since 1985, the consensus – built around the Monetarist ideas of economists like Hayek and Friedman - has been centre-right.  Rather like the 1951 Tories, in 1995 Labour’s Blairite “modernisers” embraced what by then was known as Thatcherism, and then went on to do it better than the Tories (e.g. cutting social security and beginning the process of privatising Britain’s public services) with the result that they, too, enjoyed 13 years in government.

There is some irony that so many people projected the ghost of Margaret Thatcher onto the flawed and damaged personality that is Theresa May.  Far from being strong and stable, Mrs May turned out to be an insecure and bullying control freak, whose fear of criticism caused her to exclude even her own ministers from drafting her election manifesto or from mapping out her election campaign.  The result was that she turned a 17 seat majority and an apparently unassailable 20 point lead in the polls into a minority and – if today’s polling is correct – a 5 percent lead for a newly invigorated Labour opposition.

But the deeper reason why Theresa May cannot channel the spirit of Margaret Thatcher (any more than Donald Trump can resurrect the ghost of Ronald Reagan) is that everything has changed.  In the mid-1970s:


These are the exact opposite to the problems we face today.  Since 2008 we have experienced severe deflation which weak governments have failed to resolve through low interest rates, tax cuts and debt-based quantitative easing.  Nevertheless, there is huge structural opposition to any shift away from the neoliberal economic orthodoxy with its insistence on “sound finance” and austerity cuts.  In a foresighted paper from 1943, Michael Kalecki more or less predicted current economic policy:

“In current discussions of these problems there emerges time and again the conception of counteracting the slump by stimulating private investment. This may be done by lowering the rate of interest, by the reduction of income tax, or by subsidizing private investment directly in this or another form. That such a scheme should be attractive to business is not surprising. The entrepreneur remains the medium through which the intervention is conducted. If he does not feel confidence in the political situation, he will not be bribed into investment. And the intervention does not involve the government either in 'playing with' (public) investment or 'wasting money' on subsidizing consumption."

The failure of quantitative easing (i.e. “subsidizing private investment”) tax cuts and historically low interest rates to reverse the post-2008 depression has been felt most profoundly by the young.  Unlike their parents and grandparents, who enjoyed free education and cut price council house sales, today’s young face crippling student debt and house prices far greater than they can ever hope to afford.  Moreover, as the economic slump continues, the young are increasingly aware that it is their generation that is going to be asked to pay the price of an aging population and the tax costs of bailing out the banks while receiving no support to pay back their own debts.

Without wishing to take anything away from Corbyn/Labour’s campaign – which proved far more competent that any of the Westminster Bubble commentators had suggested – it was these deeper structural issues that caused so many young people to come out to vote to prevent another majority Tory government.  It is no surprise, that Corbyn – who was regarded by opponents and allies alike as an anti-establishment (i.e. anti-consensus) extremist – became the repository for youthful discontent .  If you have reached the point where you need to change the way politics and economics are done, you are going to look to the extremes for a solution.

Nor were Britain’s young generation the only ones to rally behind Corbyn/Labour.  A large part of the older UKIP/Leave vote – which delivered the Brexit shock to a complacent political elite – switched to Labour too.  Since these were the voters that Theresa May assumed would embrace the politics of the hard-right, their switch to Labour was in its way as crucial as the youth vote.  It is likely that they broke this way for similar reasons – stagnating incomes, insecure employment, poor housing and public services, etc… issues that May either ignored or promised to worsen.

This isn’t 1979 all over again.  But I am minded of the words attributed to Mark Twain: “History doesn't repeat itself but it does rhyme.”  It might well be that the neoliberal economic/political consensus is coming to an end.  If so it will be helped along by the deeper political arithmetic of Mrs May’s failed attempt to secure a massive majority.  At the start of April, Mrs May was stood in front of three hundred cheering Tory MPs.  Today she is stood in front of at least 100 Tory MPs who face losing their seats at the next election.  They are no longer cheering; several are already sharpening metaphorical knives.  On the other side of the House, Labour MPs who stood despondent when the election was called – seeing it as no more than a mercy killing for their supposedly unelectable party – are rallying behind their leader.  Mr Corbyn now has around 100 MPs sat behind him who are only there because of the strength of the campaign that he ran.  Former critics are swallowing humble pie and jostling for their places in the new shadow cabinet.  Like the despondent figure of Edward Heath after 1975, only the most embittered Blairites continue to carp behind Mr Corbyn’s back.

We cannot know if we have reached one of those historical moments where everything changes.  For all of the euphoria around Mr Corbyn’s campaign, Labour still lost the election.  Mrs May is still Prime Minister and, with the help of the DUP, the Tories can maintain a majority in Parliament – the numbers simply do not work for any Labour-led “rainbow coalition.”  Nor should we rule out LibDem treachery at some point (perhaps with a new Tory leader) in the parliament – similar deals with the Liberals and the Ulster Unionists kept Labour in power from 1974-79, so we should not assume that the Tories will be gone anytime soon.

What matters now is whether Labour can cement a new coalition of political forces in the country.  This will involve developing a platform that can offer hope not just to Britain’s youth, but also to the downtrodden voters in Labour’s neglected ex-industrial heartlands.  That, in turn, means escaping the neoliberal consensus that says that rising incomes are always bad; that low taxes are always good; that public borrowing and investment are always to be avoided; and that public ownership is always wrong.  It is up to Labour politicians and Labour supporters to demonstrate that it is precisely these neoliberal ideas – that were entirely appropriate in the conditions of the 1970s – are the very things that are now holding everybody back, and that a new economics and politics can meet the needs of Britain’s young and old alike.
Posted by Tim Watkins at 13:24